*Giving God the Glory for One Wild Ride

This month marks the one year anniversary since God and I have been kicking MS butt. On August 31, 2009 my family and I got the dreaded news and it's been a roller coaster ride ever since. I'm happy to report that as of March/April, 2010 I have been MS blip (flare-up) free. PRAISE THE LORD! I still have *symptoms* here and there but it's NOTHING like it was. Symptoms are par for the course. This IS a progressive disease after all. There is no cure, remember, however, we keep positive, hence the MS Walk and the reason for the money YOU so generously donated to the NMSS. ;) 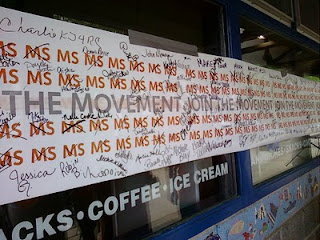 This time a year ago Jordan was carrying me up the stairs because I could not walk; my legs didn't function on their own. My mom was signing my name at the WalMart on my check card slips because I couldn't write. I was sleeping literally ALL day due to that extreme fatigue. There were other blip factors we won't go into. Today, aside from my ghetto booty dragging me behind a little, I could run a few circles around Jordan. I can actually clean my house...now if I'd just KEEP it that way! I can write and paint! I feel like getting up and DOING something and being ACTIVE! I'm HYPER again! (Yay for ya'll, huh? LOL!)

There have been so many unknowns on this journey...I won't write all of them. Some will remain between my family and me. Some took me a while to admit to myself let alone them! There have been many tears, and believe it or not, lots of laughter and plenty more to come. I've learned so much about trusting GOD and FULLY relying on HIM, HIS words, HIS love, HIS promises, HIS plans, HIS reasons, HIS EVERYTHING. I'm not totally there yet, but I won't ever be. Our relationships with the Father are a CONSTANT work in progress. If we ever feel we're too close to Him, we've all but given up.

Not having had any blips in the past few months is HUGE. In my glass-half-full-incredibly-positive-way I'd say that's the beginning of the road to remission, right? Well, some say it takes YEARS to get to remission. I say my God is bigger than their scientific bubble. *POP!* (Oops.) He planned my life out before I was born; Psalm 139 tells me this and in His very hand is the life of every creature and breath of all mankind (Job 12:10)...SURELY He's got MS by the throat.

A few weeks ago during my Bible study I ran across a story I'd read probably 1,000 times before. But this time it was different. (This is proof that my God's words are ALIVE...thanks, Pastor for reminding me of that.) I had been praying not only for this MS but for Lilli's nut allergies. We'd been conversing in the car about it one day when she piped in and said, "It would be a miracle of God if I were healed, but more than anything, Momma, I want God to heal you of your MS." And she believes, with faith that can move Ft. Mountain (bc she thinks that's the biggest one out there) that WE WILL BE RID OF THIS MESS. Of course, I'm right there with her. A day or so later was when I ran across this all too familiar section of scripture. Mark 5: 25-29; 34

"25And a woman was there who had been subject to bleeding for twelve years. 26She had suffered a great deal under the care of many doctors and had spent all she had, yet instead of getting better, she grew worse. 27When she heard about Jesus, she came up behind him and touched his cloak, 28because she thought, 'If I just touch his clothes, I will be healed.' 29Immediately her bleeding stopped and she was freed from her suffering." ........"34He said to her, 'Daughter your faith has healed you....."

*If I just touch his clothes* literally jumped off the page at me. Isn't that what we ALL want? Just to get a piece of Jesus? There were people everywhere in this massive crowd that surrounded Jesus that day but He felt the connection this woman had made with him and sought her out. (vs. 30-33) As much as I DETEST MS...the shots, not knowing if this is remission or maybe just a break...as much as I DETEST not knowing if it'll start up AGAIN...what will my next MRI reveal?....not knowing if there will EVER be a cure for this unseen WAR inside of ME. If THAT'S what it took for me to WANT and CRAVE so BADLY just a *piece* of my Master, *more* of Him than I already have and all of who He is to be whole, I'll never go back; I don't want to. I have the faith to move Ft. Mountain that He can heal me...but that may not be in His plan for me...and I'm cool with that because He knows better. However, I know this: With every step I take with Him I AM being healed. Not necessarily physically, but spiritually. I'm human so I'm constantly making mistakes and screwing up, so WE walk. WE talk. He teaches me and I learn something new from Him every day. It takes time and I praise Him that He's got patience because let's face it, I'm no walk in the park. Just like this woman, all I have to do is reach out for Jesus. Jeremiah 33:3 says to call to him and he will answer and tell me great and unsearchable things I don't know; James tells us to draw near to God and he'll draw near to us. As I've said before, I've still got lots of questions, but I know WHO my answers lie with.

2nd Corinthians tells us we're a new creation after we're saved; the old has gone and the new one has come! I'm a never-ending work in progress until the day of Christ (Phil 1:6) so I think we're safe in assuming MS is a part of that work. So, while God's working I'm gonna do my part and follow Him. I may not get it right every time, but trust and faith are the keys. They're the HARDEST ones to use in the Christian walk, but WHEN used, they open ALL the right doors. ;) 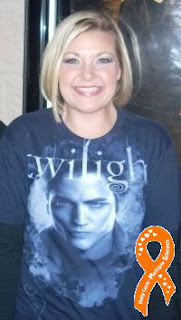 *Thank you all for your support, encouragement and most of all your prayers throughout this very trying and learning period of our lives. It's been a wild ride, with a few twists and turns, but that's life isn't it. This is what affirms our faith in the Father and we couldn't be more thankful for it. On down days it never fails, I've gotten either a message or a call; you really are the BEST and I can't praise God enough for putting you in our lives. We are BLESSED beyond measure to know you all! I wish I could "tag" all of you in this note...no, I wish I could HUG each and every one of you. Just know that YOU all are in OUR prayers as well! THANK YOU and WE LOVE YOU!
Labels: Multiple Sclerosis