I just read my last post. WOW. Grammatical errors GALORE. I don't think I even proofread that mess. I can tell I was irritated when I wrote it. Hmmm....Let's move on, shall we? Ahem....


The past few weeks have been a whirlwind. It's midterm time. I've got 2 A's and 2 B's. This is one happy nontraditional. So on to a few more introductions and an update on the Toddlers.
First of all, I don't call all of them "Toddlers" anymore....just most of them. My English class, for example: these kids are amazing. I went into my 3rd college experience with the following attitude: don't make friends. Do your job, get out, and graduate. Who am I kidding? I'm just the most social person alive and when I see someone that looks lonely, stressed, or down in the dumps, I feel that it is my job to spread the Jesus love. So that's what I've done.
I've given half of my English class nicknames....because I can't be expected to remember my own name let alone theirs. I've already introduced Ben and Allyson. They're still sitting next to me...and they're still as precious as ever. Allyson's belly is growing every day, and Ben finally removed his hat and frequently updates me on this love life. I adore those two kids. Since then, I've met and grown very fond of several others as well.

Kipp: There's Kipp, who sits behind me. What a DOLL. This kid is the typical all American high school Homecoming King and one of the sweetest, kindest, most loving little puppies I've ever met. He barrel races horses and always has tons of questions like, "Hey, Brandi! Will you check my homework?" They all apparently think I'm an English whiz......aaaaaaaaaand they would be correct. I've named Kipp "Skipper" as a nod to my Barbiedom, and as a spinoff of his other nickname, "Kipper". I think he likes it. With his sweet boyish looks, shaggy brown hair and cowboy boots, Skipper lights up every Tuesday and Thursday morning when we shout his new nickname; his cheeks blush bright red as his gleaming white smile spreads across that Peter Pan face of his. He's so sweet and mild mannered. I could adopt that kid and feed him biscuits every single day.

Wes: I heart red, yellow, black, and white kids. They make me happy. I want to be friends with all races and ethnicities; these friendships, however fleeting, remind me that we're all a part of God's creation and is that not the way God made it? Growing up in Murray County I never really had many black friends. Come to think of it, I only had two and one of them moved away in middle school. Our little pack in English has three or four black kids and a few Mexican kids. I don't really know them all because they're very quiet and don't engage with me and the others too much; there are two or three who are usually late so I never get a chance to talk with them anyway. But there is one particular kid: Wes. We call him "Chris Rock".....because he looks exactly like Chris Rock. In fact, half the time we just call him Chris. Sometimes, though, we call him "Houdini." He has all sorts of magic tricks; he'll walk into the classroom with his saggy jeans and big T-shirts, strut over to my desk with a deck of cards in his hands and perform for us. The guy is a riot! 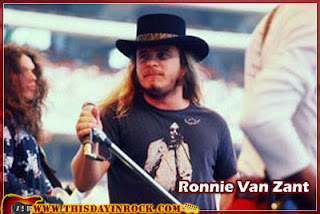 Skynyrd:  I have NO idea what this kid's real name is. He's told me, but I can't remember. All I know is that he dons some sort of rock and roll T-shirt every single day, wears his gorgeous mousy brown locks in a ponytail which offsets his amazing blue eyes, doesn't shave, and looks EXACTLY like Ronnie Van Zant. Enough said. 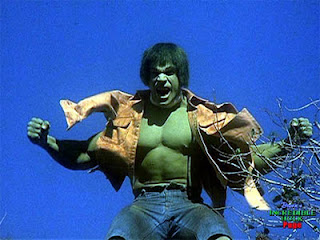 Lou aka: The Hulk: It's a lot to say someone's incredibly muscular arms are as big as my thighs. My thighs are huge. No, gargantuan. Cody sits in the back of the classroom; he doesn't say much, he just laughs at the entertainment the rest of us provide. He's fair skinned with his curly blonde hair always covered by a flat billed hat........And his muscles are scary huge. As a result, we call him either Lou (for Lou Ferrigno) or Hulk. I was sitting outside of the room one morning, waiting for class to start. I stood up as the previous class was emptying and when I arose, Cody was standing in front of me where a line had formed in through the room. His huge arm was at eye level with me, only inches from my face, and I could see nothing else. I flung back against the wall, a tiny bit petrified. My eyes were equally as big as the guns before me. How do people do that? I wondered. After we all got into the classroom I told him, "Your arms are scary big. You kinda scare me, dude." In his shy manner he grinned and said, "Thank you!" Wow. The class roared in laughter. I have a feeling sweet Lou's not as intimidating as he looks.

Lesslie: The gal doesn't say much, but when she does it's downright funny. She sits next to Chris Rock and engages everyone around her. She a spitfire, but a laid back one, usually clad in a sweatshirt, jeans, and a cute headband or hairbow in her medium brown mane. 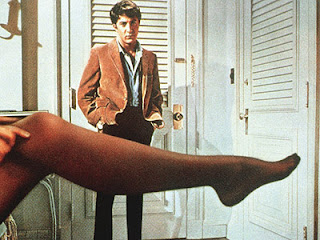 Dr. Davis: The English professor extraordinaire. We all get a kick out of the way he says "commas." It's KYAAAAAHMUHS. I really like Dr. Davis; and he looks just like Dustin Hoffman. No doubt about it, the guy is a clone.Oh, the hilarity. Last night I watched The Graduate, a movie in which Mr. Hoffman doesn't look too shabby and walks around for a good hour and a half shirtless. Yeah, watching that movie was the wrong thing to do because now I'll be thinking of Dr. Dinosaur, shirtless, and get all confused in my daydreams of the graduate himself. They'll be ruined forever. Ugh. On the plus side I think Dr. Davis pretty much thinks I'm wonderful. (Insert big cheesy smile and brown nose here.) And I have an A in his class. I heart words and the people who teach the structure of such.

Jasmine: No, she doesn't look like the cartoon, but she's just a wonderful. Jasmine sits to my left in math and hasn't a clue what she's doing numerically. But she works her little tail off and soaks up my friendship in the process. She's sweet, smart, and I love her preppy style, how she pushes her Polo glasses up from the tip of her nose, and how she carries loads of books and a huge to-go cup of coffee no matter what time of day it is. We eat at Panera together and laugh louder than anyone in the restaurant, where she tells me being Mexican is cool, since she is Mexican. She seems a little unsure of what she believes as far as her faith goes and wants to visit church with me. I love the gal to death and can't wait to cultivate the spiritual side of our friendship.

Brandon: Tyler Jones introduced me to Brandon...sort of. I looked up in History one day and there was a familiar face: Tyler's buddy Brandon, whom I'd only seen in pictures. So, I kinda introduced myself in a very loud and awkward way....across the classroom. He got the picture. When I walk into History he makes it a point to say "hey" and we usually find a Facebook post to chat back and forth on. He's a character, proud of his "brown" skin and enormously perfect smile. He seems kinda lackadaisical about his grades, staying on FOX News network and Facebook during class, which even further cracks me up. His dry wit and personality make him totally unpredictable. I like unpredictable, but I never know what's gonna come out of his mouth as a result. However, I'm never in doubt that it will be side splitting.

Yes, I have three other professors, but I'm not up for giving their backgrounds today. Maybe I will in another post. For now, my days have consisted of my new routine: school, school, and more school. That seems to be all I do, having no time to write (unless it's an essay that's being graded) and not really any time to paint either. But I'm learning so much that this English Nazi is actually afraid to go back and read any previous posts; I am the queen of commas...and placing them everywhere, even in unnecessary, spaces, just, for, the, sake, of, using, them. Of course, I must remember that this blog isn't for a grade, it's for entertainment. The commas add to that entertainment. I'm also kicking some tail in Math 98. Don't judge. That's huge for this word girl. Sociology is quite wonderful as well. However, I'm learning some things in there that absolutely appall me. I could write a book on it, but I'll spare the readers. History? Well, I have a B in there....I like my professor....I like the material....I'm just kinda ready for it to be over.
As far as the Toddlers are concerned, things are a little better. I figure if I treat them like adults, they'll act like adults. They won't have a choice.