Crosby: Short for Bing #4 (And praise God, the LAST....until next year)

What the heck was I thinking when I brought this dang elf home from my beloved Books A Million?! Dear God, next time, I promise to listen to You when You say, "You're in over your head, Griffin."
Oh, how I love bedtime around here. Our house is warm and inviting, comfy and cozy, and fifty years worth of love lives in the walls. I snuggle into my big king size sleigh-bed with the love of my life nuzzled next to me, that cheap Wal-Mart ceiling fan blowing a light breeze and buzzing softly overhead, the glow of the Netflix shining on my cherub, MAC-less cheeks. My body has settled and with a smile on my face I begin to nod off......

May the cussing ensue. "BUMPASSES!!! SONSA.....!!!!" Yes, this is usually how this works. Once again, I'm not perfect and I do, as adorable as I may seem at times, get REALLY irritated in any given irritating situation. I roll out of my bed, and quickly (if not dumbly) fumble for an idea for that darn elf. I will say this much: I am SO glad we didn't get that thing until December 11. Oh, and I was SO excited about it, too. Why didn't you people say something to me?! Not that it would've mattered; I was clearly on a Christmas mission....that lacked planning.....and thought.
Not only did I forget to get Crosby into certain compromising positions, but I also forgot to take pictures. I used my phone for a few, but some I didn't even get on film. Dang it.
After Crosby took over Lil's room and nativity set, he also took over Barbie's hot pink VW Bug. It was fabulous. Lilli found Crosby joyriding through the kitchen with Lilli's new Christmas Barbie that Mimi had purchased for her. (No, not the collector's Christmas Barbie. Really? Would one even ask me that?) Miss Lilli found this to be absolutely riotous. He then moved on to one of our Christmas angel ornaments on the tree. Lilli found Mr. Crosby hugged up to her, his arms around her glittery and winged body, hoping to steal a kiss, I presume. 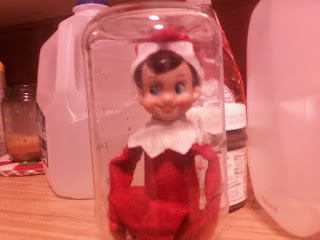 The next morning, Lilli awoke to find Crosby in the same position as before: still in the arms of that angel. She was very disapointed, and I went from Mom of the Year to Dud of the Year in .2 seconds flat. What did I do to redeem myself? I shoved him under a Mason Jar.
What an 80s baby I am. All I could think of was Anthony Michael Hall trapped under that glass table in Sixteen Candles. His nerdy braces shining under the beer cans and pretzels; then I heard that horrible girly scream in my head. Perfect. I would now scar my child the way Mr. Hall did me. I realized this all too late when she came be-bopping down the hall, skipping to her own soundtrack she composes as the days go on.
"MOM!!!! Look at Crosby!!! He's STUCK!" She laughed with glee. My glass table fear from moments before was eased. Yeah, it was a cute idea.
On Crosby's last night, Christmas Eve, we entered Lilli's playroom that afternoon and wouldn't ya know it: that little booger had every stuffed animal that wanted to listen to him in the floor, whilst he sat perched in the Disney Princess Rocking chair reading none other than, you guessed it, The Night Before Christmas. 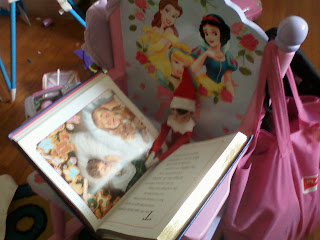 Even though keeping up with this little devil has, at times, been a pain, I enjoyed every minute of it. Seeing Lilli's smiling face and that special Christmas light that only children possess made every middle of the night fiasco worth it. Here's to next year with ole Crosby.....I hope I have more ideas by then..... 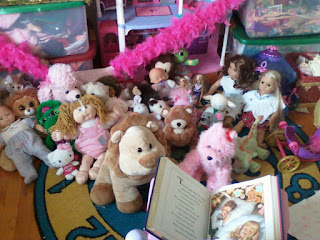