The Griffin Clan has started a new Christmas tradition this year: Elf on the Shelf. Lilli's little buddies at school are doing the activity. She comes home talking about it all the time with visions of chaos that can't be blamed on her dancing in her little glittery head. Naturally, like all amazing parents, Jordy and I purchased an elf for adoption.
I was a little late this year; it's my understanding that the elf comes to your home from the North Pole on December 1st. Well, that part's not in the book that I read when I purchased this creepy little guy on December 11th.....unless my MS brain just forgot it....and we'll go with that for now.
I bought the new little Christmas family member for Bug and she named him Snowy. Snowy? "Lil, baby....let's work on that," I said. She was persistent. "But I want him to be SNOWY! If he is, it'll snow this year!" She said, very adamantly. "Well, we can find a snow themed name...." So I thought. Praise God for Sunny 92.3 radio station! "White Christmas" came on the radio while I was in deep thought and driving us home from Mimi's house. "What about White Christmas, Momma?" She said and proceeded to try it out: " 'Hey, White Christmas! How's it going?' ............Well....no. That's not cute." And so she thought some more. I could hear her hamster wheel squeaking when I said, "What about Bing for Bing Crosby?" I mean, HELLO! Who doesn't think about Bing Crosby, snow, and Christmas all at the same time? "CROSBY, Momma!!! His name is Crosby Griffin!" So Crosby Griffin the Elf on the Shelf it is. 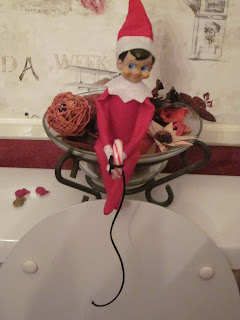 I love my kid. She knows how to name an elf. I might let her name the next kid. (Hope her first thought isn't something like, Tree.)
Now that we have Crosby, Thing 1 and Thing 2 (Jordan and I) must come up with ideas for this little guy in order to bribe our child to behave. (As if that's very hard-she's kinda perfect.) For those of you who are unfamiliar with Elf on the Shelf, allow me to give you a synopsis: Your family adopts an elf who shows up every year for Christmas. He works for Santa at the Pole, and basically, he's Santa's eyes and ears for kids all over the world. Your new little adoptee comes to live with your family and keeps tabs on your child's (children's) behavior for Ole St. Nick. In the night, while your little dumpling is fast asleep, Mr. Elf makes a quick trip to the N.P. to give the Fat Boy the behavior report for the day. He comes back to your house and has a little fun while you're all asleep....'scuse me, while the munchkin is asleep and you're staying up all night, every night, to make a mess......that you will have to clean up. Ah, but it's SO worth it when you see the glow in that sweet baby's face-so if you're a "good" parent you'll DO IT! On Christmas Eve the elf heads back to the N.P. (or a dark closet) only to return NEXT year. Pretty cute, huh? 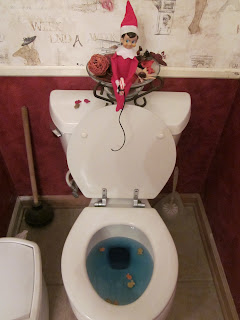 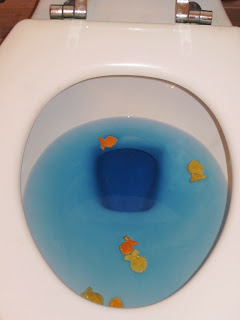 The first night Crosby spent at Griffin Manor he went fishing......in our toilet.  Crosby apparently didn't have his Fly Rod 2000 on hand. He, therefore, made do with a candy cane from our Christmas tree and some of my ornament string. Nice, Crosby. Of course there are no fish in Booty Pond, so he also helped himself to some of the Goldfish in the pantry. They were everywhere: on Lilli's nightstand, on her dresser, on the bookshelves in the hall, on the bathroom counter, and of course, the toilet. As you can see he used blue food coloring to give the toilet water a more deep-sea-adventure feel. You little rascal, you!
Lilli flipped out when she saw him there, perched on the back of the porcelain throne as if he owned the joint. Her screech of "EEEEWWWWW" was enough satisfaction for Jordan and me. We knew immediately that our new tradition was a great idea! 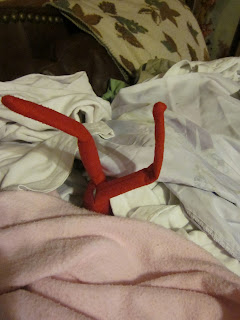 Sunday night was shot night so I was pretty much toasted the rest of the night. (For those unfamiliar with the MS shot, it causes flu-like symptoms.) Therefore, Crosby remained at his toilet post for the evening. Lil was disappointed when she awoke this morning, so I knew I had to do something for her arrival home from school this afternoon.  I ran to school to pick her up and as we walked through the door to the house, this is what we found: Lilli's undies covering our Christmas tree. (Sorry, friends. I just can't bring myself to post a pic of my child's underwear on a public blog. But yes: undies EVERYWHERE.)  She completely bypassed the tree, totally unaware of what had taken place. I had to act quickly; I pulled out my very best Meryl Streep: "Oh, my GOSH!!! My TREE!!!!!" I stood in the doorway and dropped everything that was in my hands and froze. What a performance! And the Oscar goes toooooo.........BRANDI GRIFFIN for best portrayal of Overly-Excited-and-Surprised-Elf-on-the-Shelf-Disaster-Mom!!! The crowd. Goes. Wild.
Lilli's face was priceless. PRICELESS. Her eyes were the size of dinner platters. They sparkled in the tree light as she spotted Crosby: head first in the clean laundry pile. She burst into laughter and shouted, "Wait till my friends hear about THIS one!!!"
Take a bow, Mom. You have succeeded again. I hugged her and kissed her, happy that she was happy.
As for the rest of the Elf ideas, I will post every single one we get along with pics. Feel free to borrow some ideas and check back tomorrow for the next post! We're all excited here at Griffin Manor to see what lil' Crosby will get into next! Now....who wants to fold my laundry?